Dask and the __array_function__ protocol Advances on NEP-18

Dask is versatile for analytics parallelism, but there is still one issue to leverage it to a broader spectrum: allowing it to transparently work with NumPy-like libraries. We have previously discussed how to work with GPU Dask Arrays, but limited to the scope of the array’s member methods sharing a NumPy-like interface, for example the .sum() method, thus, calling general functionality from NumPy’s library wasn’t still possible. NumPy recently addressed this issue in NEP-18 with the introduction of the __array_function__ protocol. In short, the protocol allows a NumPy function call to dispatch the appropriate NumPy-like library implementation, depending on the array type given as input, thus allowing Dask to remain agnostic of such libraries, internally calling just the NumPy function, which automatically handles dispatching of the appropriate library implementation, for example, CuPy or Sparse.

To understand what’s the end goal of this change, consider the following example:

Now consider we want to speedup the SVD computation of a Dask array and offload that work to a CUDA-capable GPU, we ultimately want to simply replace the NumPy array x by a CuPy array and let NumPy do its magic via __array_function__ protocol and dispatch the appropriate CuPy linear algebra operations under the hood:

We could do the same for a Sparse array, or any other NumPy-like array that supports the __array_function__ protocol and the computation that we are trying to perform. In the next section, we will take a look at potential performance benefits that the protocol helps leveraging.

Note that the features described in this post are still experimental, some still under development and review. For a more detailed discussion on the actual progress of __array_function__, please refer to the Issues section.

Before going any further, assume the following hardware is utilized for all performance results described in this entire post:

Let’s now check an example to see potential performance benefits of the __array_function__ protocol with Dask when using CuPy as a backend. Let’s start by creating all the arrays that we will use for computing an SVD later. Please note that my focus here is how Dask can leverage compute performance, therefore I’m ignoring in this example the time spent on creating or copying the arrays between CPU and GPU.

Seen above we have four arrays:

Compute SVD on a NumPy array

We can then start by computing the SVD of x using NumPy, thus, it’s processed on CPU in a single thread:

The timing information I obtained after that looks like the following:

Over 3 minutes seems a bit too slow, so now the question is: Can we do better, and more importantly, without having to change our entire code?

The answer to this question is: Yes, we can.

Let’s look now at other results.

Compute SVD on the NumPy array wrapped in Dask array

First, of all, this is what you had to do before the introduction of the __array_function__ protocol:

The code above might have been very prohibitive for several projects, since one needs to call the proper library dispatcher in addition to passing the correct array. In other words, one would need to find all NumPy calls in the code and replace those by the correct library’s function call, depending on the input array type. After __array_function__, the same NumPy function can be called, using the Dask array dx as input:

Note: Dask defers computation of results until its consumption, therefore we need to call the dask.compute() function on result arrays to actually compute them.

Let’s now take a look at the timing information:

Now, without changing any code, besides the wrapping of the NumPy array as a Dask array, we can see a speedup of 2x. Not too bad. But let’s go back to our previous question: Can we do better?

Compute SVD on the CuPy array

We can do the same as for the Dask array now and simply call NumPy’s SVD function on the CuPy array y:

The timing information we get now is the following:

We now see a 4-5x speedup with no change in internal calls whatsoever! This is exactly the sort of benefit that we expect to leverage with the __array_function__ protocol, speeding up existing code, for free!

Let’s go back to our original question one last time: Can we do better?

Compute SVD on the CuPy array wrapped in Dask array

We can now take advantage of the benefits of Dask data chunk splitting and the CuPy GPU implementation, in an attempt to keep our GPU busy as much as possible, this remains as simple as:

For which we get the following timing:

Giving us another 2x speedup over the single-threaded CuPy SVD computing.

To conclude, we started from over 3 minutes and are now down to under 10 seconds by simply dispatching the work on a different array.

We will now talk a bit about potential applications of the __array_function__ protocol. For this, we will discuss the Dask-GLM library, used for fitting Generalized Linear Models on large datasets. It’s built on top of Dask and offers an API compatible with scikit-learn.

Before the introduction of the __array_function__ protocol, we would need to rewrite most of its internal implementation for each and every NumPy-like library that we wished to use as a backend, therefore, we would need a specialization of the implementation for Dask, another for CuPy and yet another for Sparse. Now, thanks to all the functionality that these libraries share through compatible interface, we don’t have to change the implementation at all, we simply pass a different array type as input, as simple as that.

To demonstrate the ability we acquired, let’s consider the following scikit-learn example (based on the original example here):

We can then fit the model,

and obtain its time measurements:

We can then use it for prediction on some test data,

And also check its time measurements:

And finally plot the results: 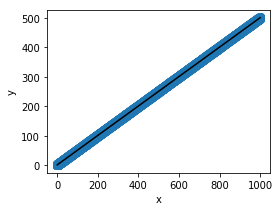 The only thing we have to change from the code before is the first block, where we import libraries and create arrays:

The rest of the code and also the plot look alike the previous scikit-learn example, so we’re ommitting those here for brevity. Note also that we could have called LinearRegression() without any arguments, but for this example we chose the lbfgs solver, that converges reasonably fast.

We can also have a look at the timing results for fitting, followed by those for predicting with Dask-GLM:

If instead we want to use CuPy to compute, we have to change only 3 lines, importing cupy instead of numpy, and the two lines where we create the random arrays, replacing them to cupy.random insted of np.random. The block should then look like this:

And the timing results we obtain in this scenario are:

For the simple example chosen for this post, scikit-learn outperforms Dask-GLM using both NumPy and CuPy arrays. There may exist several reasons that contribute to this, and while we didn’t dive deep into understanding the exact reasons and their extent, we could cite some likely possibilities:

To verify how Dask-GLM with NumPy arrays would compare with CuPy arrays, we also did some logistic regression benchmarking of Dask-GLM solvers. The results below were obtained from a training dataset with 102, 103, …, 106 features of 100 dimensions, and matching number of test features.

Note: we are intentionally omitting results for Dask arrays, as we have identified a potential bug that causes Dask arrays not to converge. 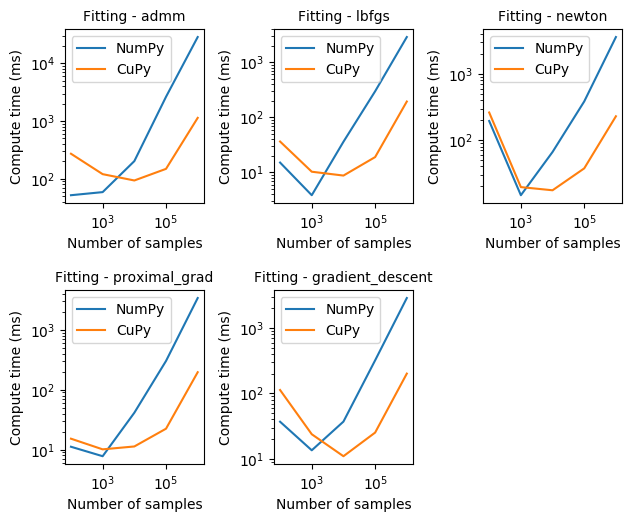 From the results observed in the graphs above we can see that CuPy can be one order of magnitude faster than NumPy for fitting with any of the Dask-GLM solvers. Please note also that both axis are given in logarithmic scale for easier visualization.

Another interesting effect that can be seen is how converging may take longer for small number of samples. However, as we would normally hope for, compute time required to converge scales linearly to the number of samples. 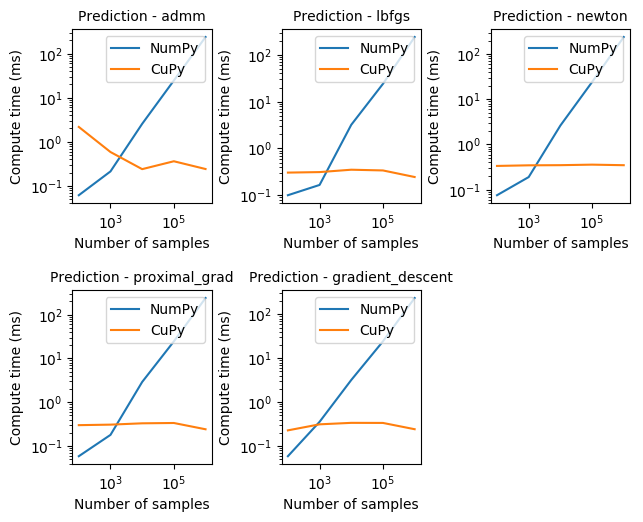 Prediction with CuPy, as seen above, can be proportionally much faster than NumPy, staying mostly constant for all solvers, and around 3-4 orders of magnitude faster.

In this section we describe the work that has been done and is still ongoing since February, 2019, towards enabling the features described in previous sections. If you are not interested in all the details, feel free to completely skip this.

Since early February, 2019, substantial progress has been made towards deeper support of the __array_function__ protocol in the different projects, this trend is still going on and will continue in March. Below we see a list of issues that have been fixed or are in the process of review:

Currently, one of the biggest issues we are tackling relates to the Dask issue #4490 we first identified when calling Dask’s diag() on a CuPy array. This requires some change on the Dask Array class, and subsequent changes throughout large parts of the Dask codebase. I will not go into too much detail here, but the way we are handling this issue is by adding a new attribute _meta to Dask Array in replacement of the simple dtype that currently exists. This new attribute will not only hold the dtype information, but also an empty array of the backend type used to create the Array in the first place, thus allowing us to internally reconstruct arrays of the backend type, without having to know explicitly whether it’s a NumPy, CuPy, Sparse or any other NumPy-like array. For additional details, please refer to Dask Issue #2977.

We have identified some more issues with ongoing discussions:

There are several possibilities for a richer experience with Dask, some of which could be very interesting in the short and mid-term are: