This work is supported by Anaconda Inc.

I’m pleased to announce the release of Dask version 0.19.0. This is a major release with bug fixes and new features. The last release was 0.18.2 on July 23rd. This blogpost outlines notable changes since the last release blogpost for 0.18.0 on June 14th.

A ton of work has happened over the past two months, but most of the changes are small and diffuse. Stability, feature parity with upstream libraries (like Numpy and Pandas), and performance have all significantly improved, but in ways that are difficult to condense into blogpost form.

That being said, here are a few of the more exciting changes in the new release.

Over the past few months Jim Crist has bulit a suite of tools to deploy applications on YARN, the primary cluster manager used in Hadoop clusters.

Jim has written about Skein and Dask-Yarn in two recent blogposts:

Some advanced workloads want to directly manage and mutate state on workers. A task-based framework like Dask can be forced into this kind of workload using long-running-tasks, but it’s an uncomfortable experience.

To address this we’ve added an experimental Actors framework to Dask alongside the standard task-scheduling system. This provides reduced latencies, removes scheduling overhead, and provides the ability to directly mutate state on a worker, but loses niceties like resilience and diagnostics. The idea to adopt Actors was shamelessly stolen from the Ray Project :)

You can read more about actors in the Actors documentation.

The Dask dashboard is a critical tool to understand distributed performance. There are a few accessibility issues that trip up beginning users that we’ve addressed in this release.

You can now save a task stream record by wrapping a computation in the get_task_stream context manager.

This gives you the start and stop time of every task on every worker done during that time. It also saves that data as an HTML file that you can share with others. This is very valuable for communicating performance issues within a team. I typically upload the HTML file as a gist and then share it with rawgit.com

The Dashboard’s layout was designed to be used on a single screen, side-by-side with a Jupyter notebook. This is how many Dask developers operate when working on a laptop, however it is not how many users operate for one of two reasons:

In these cases the styling of the dashboard becomes odd. Fortunately, Luke Canavan and Derek Ludwig recently improved the CSS for the dashboard considerably, allowing it to switch between narrow and wide screens. Here is a snapshot. 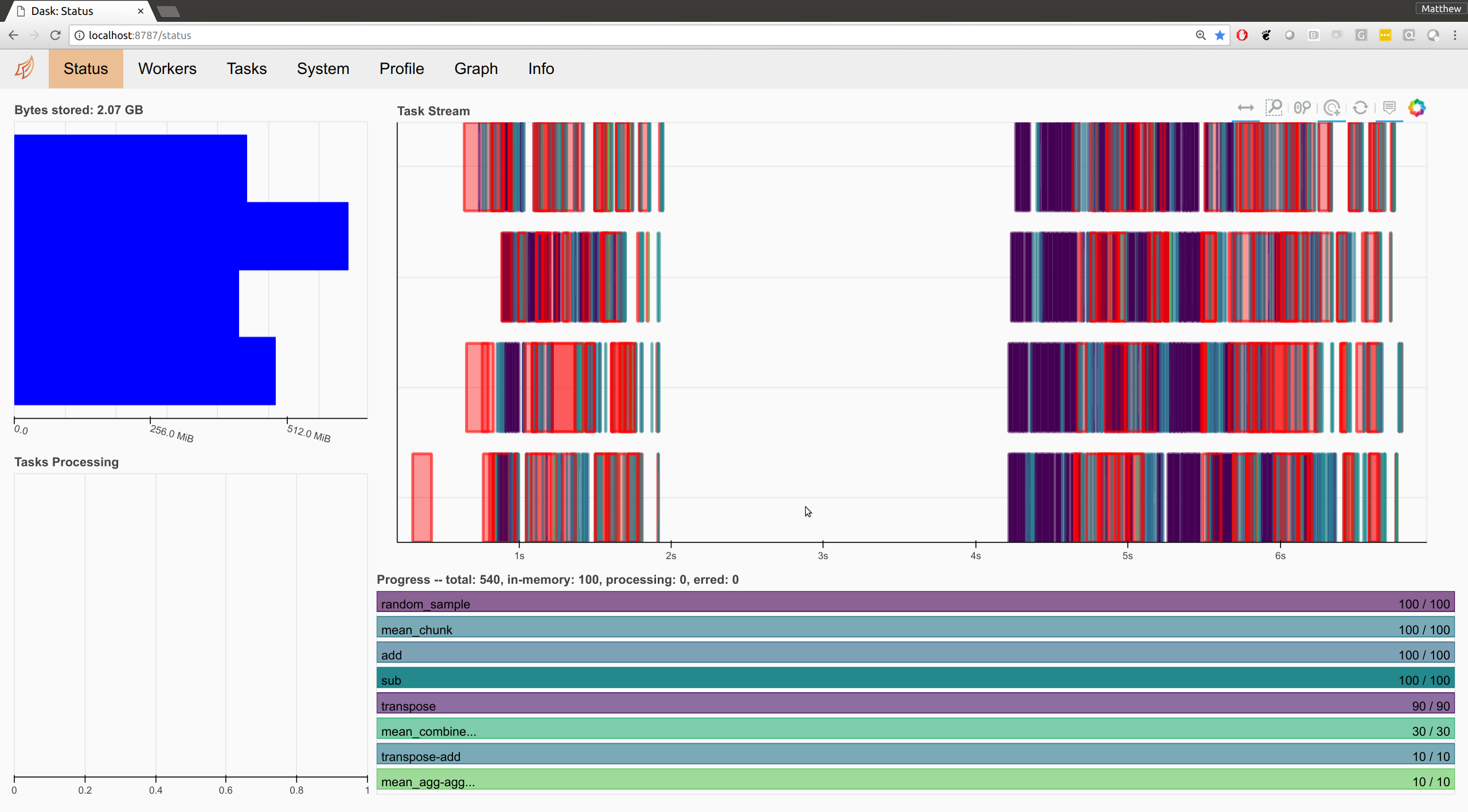 This allows you to layout your own dashboard directly within JupyterLab. You can combine plots from different pages, control their sizing, and so on. You will need to provide the address of the dashboard server (http://localhost:8787 by default on local machines) but after that everything should persist between sessions. Now when I open up JupyterLab and start up a Dask Client, I get this: 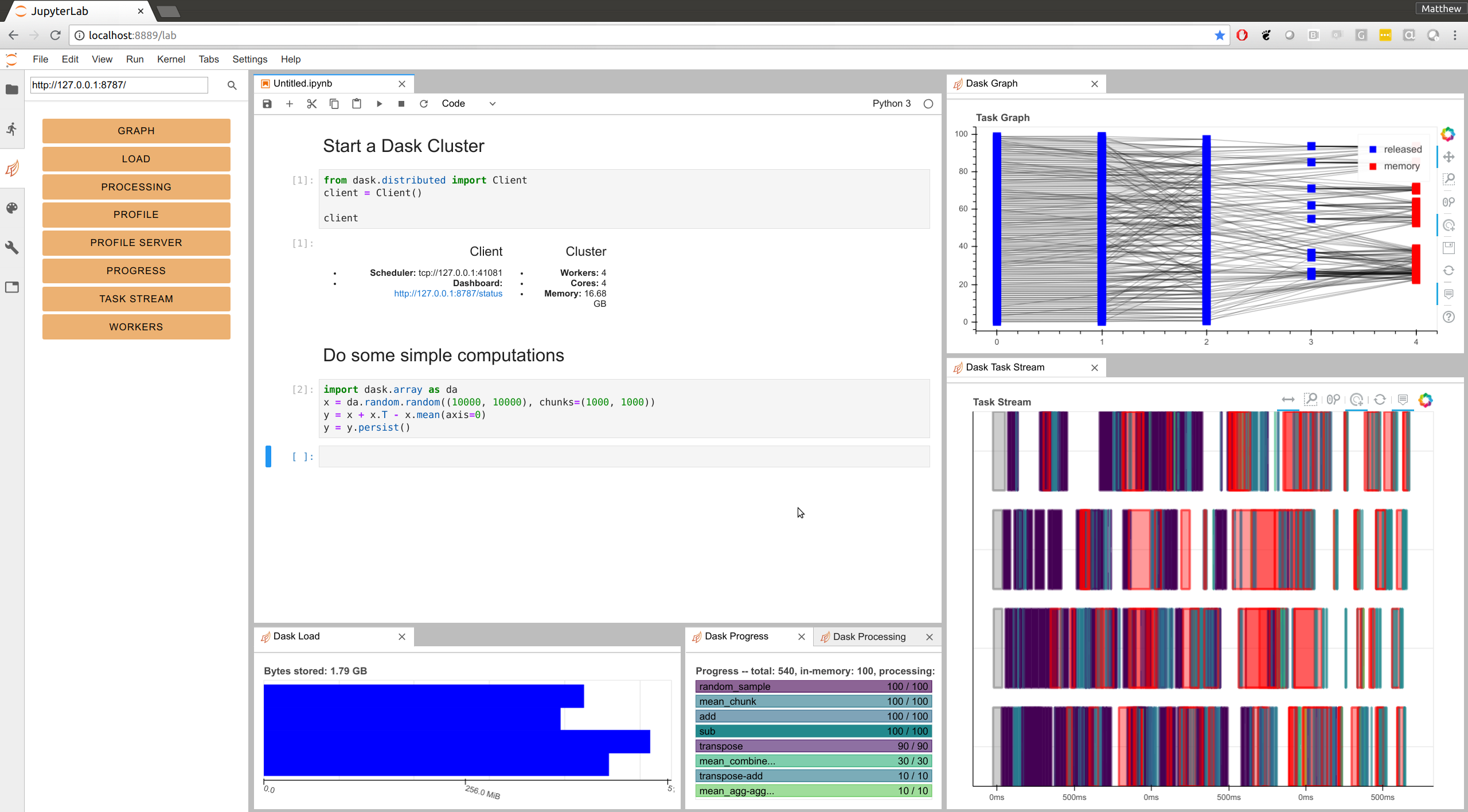 Thanks to Ian Rose for doing most of the work here.

People who use Dask have been writing about their experiences at Dask Stories. In the last couple months the following people have written about and contributed their experience:

These stories help people understand where Dask is and is not applicable, and provide useful context around how it gets used in practice. We welcome further contributions to this project. It’s very valuable to the broader community.

The Dask-Examples repository maintains easy-to-run examples using Dask on a small machine, suitable for an entry-level laptop or for a small cloud instance. These are hosted on mybinder.org and are integrated into our documentation. A number of new examples have arisen recently, particularly in machine learning. We encourage people to try them out by clicking the link below.