This work is supported by Anaconda Inc. and the Data Driven Discovery Initiative from the Moore Foundation.

I’m pleased to announce the release of Dask version 0.16.0. This is a major release with new features, breaking changes, and stability improvements. This blogpost outlines notable changes since the 0.15.3 release on September 24th.

Conda packages are available on both conda-forge and default channels.

It is now easier to implement custom collections using the Dask collection interface.

Dask collections (arrays, dataframes, bags, delayed) interact with Dask schedulers (single-machine, distributed) with a few internal methods. We formalized this interface into protocols like .__dask_graph__() and .__dask_keys__() and have published that interface. Any object that implements the methods described in that document will interact with all Dask scheduler features as a first-class Dask object.

This interface has already been implemented within the XArray project for labeled and indexed arrays. Now all XArray classes (DataSet, DataArray, Variable) are fully understood by all Dask schedulers. They are as first-class as dask.arrays or dask.dataframes.

Dask is built on the Tornado library for concurrent network programming. In an effort to improve inter-worker bandwidth on exotic hardware (Infiniband), Dask developers are proposing changes to Tornado’s network infrastructure.

However, in order to use these changes Dask itself needs to run on the next version of Tornado in development, Tornado 5.0.0, which breaks a number of interfaces on which Dask has relied. Dask developers have been resolving these and we encourage other PyData developers to do the same. For example, neither Bokeh nor Jupyter work on Tornado 5.0.0-dev.

Dask inter-worker bandwidth is peaking at around 1.5-2GB/s on a network theoretically capable of 3GB/s. GitHub issue: pangeo #6

Network performance and Tornado compatibility are primarily being handled by Antoine Pitrou.

Dask.dataframe can use either of the two common Parquet libraries in Python, Apache Arrow and Fastparquet. Each has its own strengths and its own base of users who prefer it. We’ve significantly extended Dask’s parquet test suite to cover each library, extending roundtrip compatibility. Notably, you can now both read and write with PyArrow.

There is still work to be done here. The variety of parquet reader/writers and conventions out there makes completely solving this problem difficult. It’s nice seeing the various projects slowly converge on common functionality.

This work was jointly done by Uwe Korn, Jim Crist, and Martin Durant.

One of the most requested features for the Dask.distributed scheduler is the ability to retry failed tasks. This is particularly useful to people using Dask as a task queue, rather than as a big dataframe or array.

The Dask.distributed task scheduler performs load balancing through work stealing. Previously this would sometimes result in the same task running simultaneously in two locations. Now stealing is transactional, meaning that it will avoid accidentally running the same task twice. This behavior is especially important for people using Dask tasks for side effects.

It is still possible for the same task to run twice, but now this only happens in more extreme situations, such as when a worker dies or a TCP connection is severed, neither of which are common on standard hardware.

There is a new set of diagnostic web pages available in the Info tab of the dashboard. These pages provide more in-depth information about each worker and task, but are not dynamic in any way. They use Tornado templates rather than Bokeh plots, which means that they are less responsive but are much easier to build. This is an easy and cheap way to expose more scheduler state. 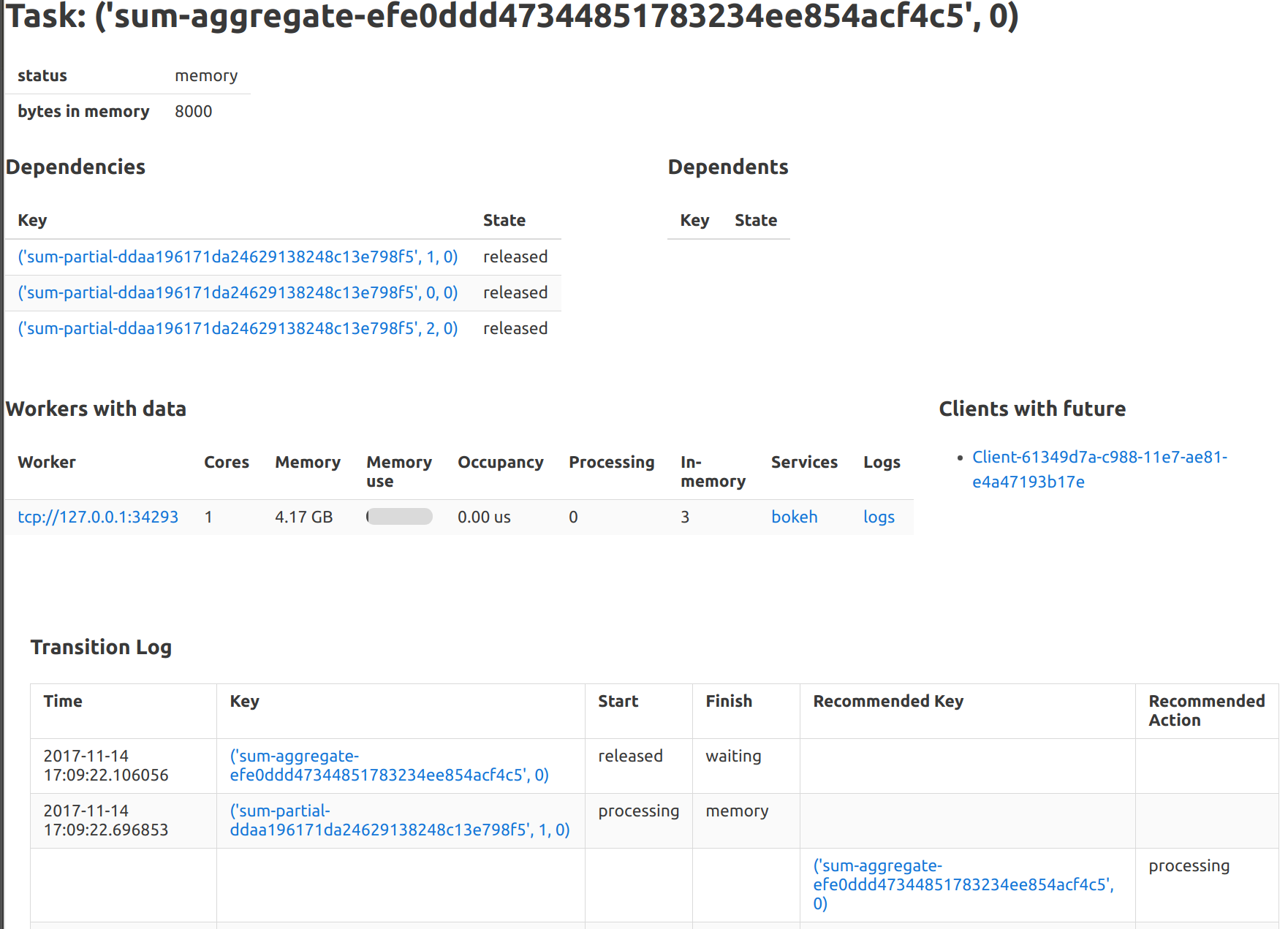 The workers now explicitly call gc.collect() at various times when under memory pressure and when releasing data. This helps to avoid some memory leaks, especially when using Pandas dataframes. Doing this carefully proved to require a surprising degree of detail.

Improved garbage collection was primarily implemented and tested by Fabian Keller and Olivier Grisel, with recommendations by Antoine Pitrou.

A variety of Dask Machine Learning projects are now being assembled under one unified repository, dask-ml. We encourage users and researchers alike to read through that project. We believe there are many useful and interesting approaches contained within.

The work to assemble and curate these algorithms is primarily being handled by Tom Augspurger.

The XArray project for indexed and labeled arrays is also releasing their major 0.10.0 release this week, which includes many performance improvements, particularly for using Dask on larger datasets.

The following people contributed to the dask/dask repository since the 0.15.3 release on September 24th:

The following people contributed to the dask/distributed repository since the 1.19.1 release on September 24nd:

The following people contributed to the dask/dask-ml repository

In addition, we are proud to announce that Olivier Grisel has accepted commit rights to the Dask projects. Olivier has been particularly active on the distributed scheduler, and on related projects like Joblib, SKLearn, and Cloudpickle.