This work is supported by Continuum Analytics and the Data Driven Discovery Initiative from the Moore Foundation.

I’m pleased to announce the release of Dask version 0.15.0. This release contains performance and stability enhancements as well as some breaking changes. This blogpost outlines notable changes since the last release on May 5th.

As always you can conda install Dask:

or pip install from PyPI

Conda packages are available both on the defaults and conda-forge channels.

Thanks to recent changes in NumPy 1.13.0, NumPy ufuncs now operate as Dask.array ufuncs. Previously they would convert their arguments into Numpy arrays and then operate concretely.

To celebrate this change we’ve also improved support for more of the NumPy ufunc and reduction API, such as support for out parameters. This means that a non-trivial subset of the actual NumPy API works directly out-of-the box with dask.arrays. This makes it easier to write code that seamlessly works with either array type.

Note: the ufunc feature requires that you update NumPy to 1.13.0 or later. Packages are available through PyPI and conda on the defaults and conda-forge channels.

The Dask.distributed API is capable of operating within a Tornado or Asyncio event loop, which can be useful when integrating with other concurrent systems like web servers or when building some more advanced algorithms in machine learning and other fields. The API to do this used to be somewhat hidden and only known to a few and used underscores to signify that methods were asynchronous.

These methods are still around, but the process of starting the client has changed and we now recommend using the fully public methods even in asynchronous situations (these used to block).

You can also await futures directly:

You can use yield instead of await if you prefer Python 2.

More information is available at https://distributed.readthedocs.org/en/latest/asynchronous.html.

The single-machine scheduler used to live in the dask.async module. With async becoming a keyword since Python 3.5 we’re forced to rename this. You can now find the code in dask.local. This will particularly affect anyone who was using the single-threaded scheduler, previously known as dask.async.get_sync. The term dask.get can be used to reliably refer to the single-threaded base scheduler across versions.

Early blogposts referred to functions like futures_to_dask_array which resided in the distributed.collections module. These have since been entirely replaced by better interactions between Futures and Delayed objects. This module has been removed entirely.

Dask workers create a directory where they can place temporary files. Typically this goes into your operating system’s temporary directory (/tmp on Linux and Mac).

While convenient, this behavior gave rise to corner cases and stopped us from being able to support multi-bag mapping functions. It has since been removed. As an advantage though, you can now map two co-partitioned bags together.

Clients and Futures have nicer HTML reprs that show up in the Jupyter notebook. 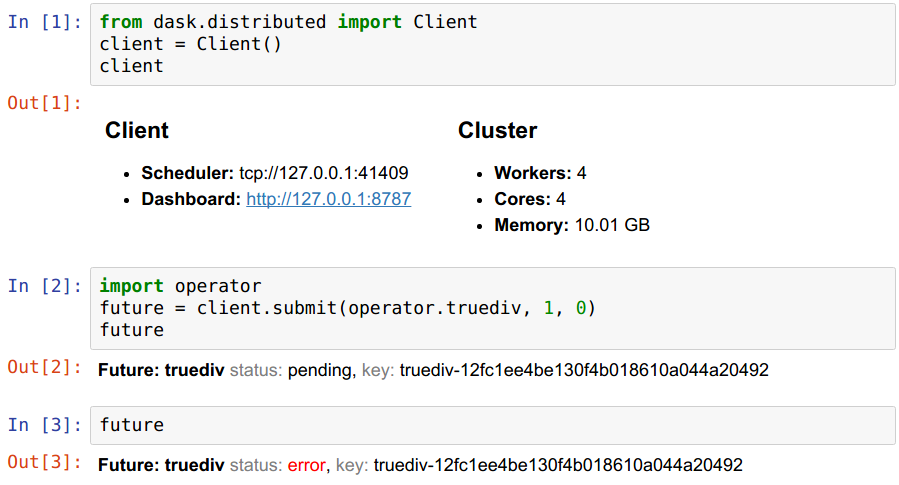 More primitives to help coordinate between multiple clients on the same cluster have been added. These include Queues and shared Variables for futures.

When using Dask to power Joblib computations (such as occur in Scikit-Learn) with the joblib.parallel_backend context manager, you can now pre-scatter select data to all workers. This can significantly speed up some scikit-learn computations by reducing repeated data transfer.

As usual, a number of bugs were identified and resolved and a number of performance optimizations were implemented. Thank you to all users and developers who continue to help identify and implement areas for improvement. Users should generally have a smoother experience.

We have removed the experimental ZeroMQ networking backend. This was not particularly useful in practice. However it was very effective in serving as an example while we were making our network communication layer pluggable with different protocols.

The following related projects have also been released recently and may be worth updating:

The following people contributed to the dask/dask repository since the 0.14.3 release on May 5th:

The following people contributed to the dask/distributed repository since the 1.16.2 release on May 5th: