This work is supported by Continuum Analytics and the Data Driven Discovery Initiative from the Moore Foundation.

I’m pleased to announce the release of Dask version 0.14.3. This release contains a variety of performance and feature improvements. This blogpost includes some notable features and changes since the last release on March 22nd.

As always you can conda install from conda-forge

or you can pip install from PyPI

Conda packages should be on the default channel within a few days.

In order to support sparse arrays we did two things:

This process was pretty easy and could be extended to other systems. This also allows for different kinds of ndarrays in the same Dask array, as long as interactions between the arrays are well defined (using the standard NumPy protocols like __array_priority__ and so on.)

Update: there is already a pull request for Masked arrays

The da.fft submodule has been extended to include most of the functions in np.fft, with the caveat that multi-dimensional FFTs will only work along single-chunk dimensions. Still, given that rechunking is decently fast today this can be very useful for large image stacks.

You can now run arbitrary code whenever a dask array is constructed. This empowers users to build in their own policies like rechunking, warning users, or eager evaluation. A dask.array plugin takes in a dask.array and returns either a new dask array, or returns None, in which case the original will be returned.

This can be used, for example, to convert dask.array code into numpy code to identify bugs quickly:

Or to warn users if they accidentally produce an array with large chunks:

These features were heavily requested by the climate science community, which tends to serve both highly technical computer scientists, and less technical climate scientists who were running into issues with the nuances of chunking.

Dask.dataframe changes are both numerous, and very small, making it difficult to give a representative accounting of recent changes within a blogpost. Typically these include small changes to either track new Pandas development, or to fix slight inconsistencies in corner cases (of which there are many.)

Dask now supports reading Parquet data with both fastparquet (a Numpy/Numba solution) and Arrow and Parquet-CPP.

Hopefully this capability increases the use of both projects and results in greater feedback to those libraries so that they can continue to advance Python’s access to the Parquet format.

As Dask has grown into more communities, each with strong and differing performance constraints, we’ve found that we needed to allow each community to define its own optimization schemes. The defaults have not changed, but now you can override them with your own. This can be set globally or with a context manager.

Additionally, task fusion has been significantly accelerated. This is very important for large graphs, particularly in dask.array computations.

The distributed scheduler’s web diagnostic page is now served from within the dask scheduler process. This is both good and bad:

Because Bokeh and Dask now share the same Tornado event loop we no longer need to send messages between them to then send out to a web browser. The Bokeh server has full access to all of the scheduler state. This lets us build new diagnostic pages more easily. This has been around for a while but was largely used for development. In this version we’ve switched the new version to be default and turned off the old one. 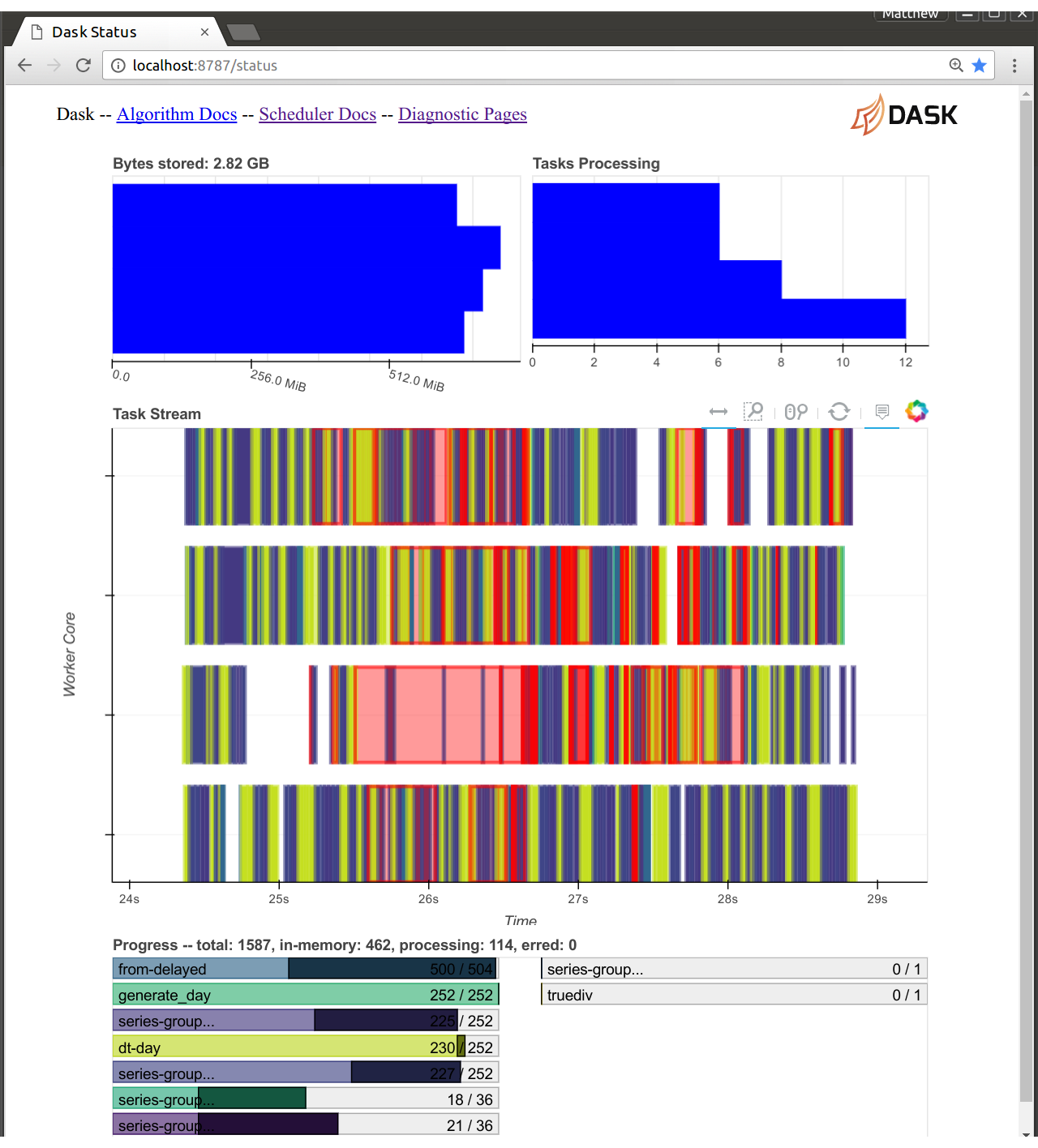 The cost here is that the Bokeh scheduler can take 10-20% of the CPU use. If you are running a computation that heavily taxes the scheduler then you might want to close your diagnostic pages. Fortunately, this almost never happens. The dask scheduler is typically fast enough to never get close to this limit.

Beware that the current versions of Bokeh (0.12.5) and Tornado (4.5) do not play well together. This has been fixed in development versions, and installing with conda is fine, but if you naively pip install then you may experience bad behavior.

The Dask.distributed Joblib backend now includes a scatter= keyword, allowing you to pre-scatter select variables out to all of the Dask workers. This significantly cuts down on overhead, especially on machine learning workloads where most of the data doesn’t change very much.

Early trials indicate that computations like scikit-learn’s RandomForest scale nicely on a cluster without any additional code.

When starting a dask.distributed scheduler or worker people often want to include a bit of custom setup code, for example to configure loggers, authenticate with some network system, and so on. This has always been possible if you start scheduler and workers from within Python but is tricky if you want to use the command line interface. Now you can write your custom code as a separate standalone script and ask the command line interface to run it for you at startup:

This makes it easier for people to adapt Dask to their particular institution.

Many people use Dask on high performance supercomputers. This hardware differs from typical commodity clusters or cloud services in several ways, including very high performance network interconnects like InfiniBand. Typically these systems also have normal ethernet and other networks. You’re probably familiar with this on your own laptop when you have both ethernet and wireless:

The default systems Dask uses to determine network interfaces often choose ethernet by default. If you are on an HPC system then this is likely not optimal. You can direct Dask to choose a particular network interface with the --interface keyword

The as_completed iterator returns futures in the order in which they complete. It is the base of many asynchronous applications using Dask.

And also yield all futures (and results) that have finished up until this point.

Both of these help to decrease the overhead of tight inner loops within asynchronous applications.

This release is aligned with a number of other related libraries, notably Pandas, and several smaller libraries for accessing data, including s3fs, hdfs3, fastparquet, and python-snappy each of which have seen numerous updates over the past few months. Much of the work of these latter libraries is being coordinated by Martin Durant

The following people contributed to the dask/dask repository since the 0.14.1 release on March 22nd

The following people contributed to the dask/distributed repository since the 1.16.1 release on March 22nd