Dask has been active lately due to a combination of increased adoption and funded feature development by private companies. This increased activity is great, however an unintended side effect is that I have spent less time writing about development and engaging with the broader community. To address this I hope to write one blogpost a week about general development. These will not be particularly polished, nor will they announce ready-to-use features for users, however they should increase transparency and hopefully better engage the developer community.

So themes of last week

The distributed scheduler’s web diagnostic page is one of Dask’s more flashy features. It shows the passage of every computation on the cluster in real time. These diagnostics are invaluable for understanding performance both for users and for core developers.

I intend to focus on worker performance soon, so I decided to attach a Bokeh server to every worker to serve web diagnostics about that worker. To make this easier, I also learned how to embed Bokeh servers inside of other Tornado applications. This has reduced the effort to create new visuals and expose real time information considerably and I can now create a full live visualization in around 30 minutes. It is now faster for me to build a new diagnostic than to grep through logs. It’s pretty useful.

Here are some screenshots. Nothing too flashy, but this information is highly valuable to me as I measure bandwidths, delays of various parts of the code, how workers send data between each other, etc.. 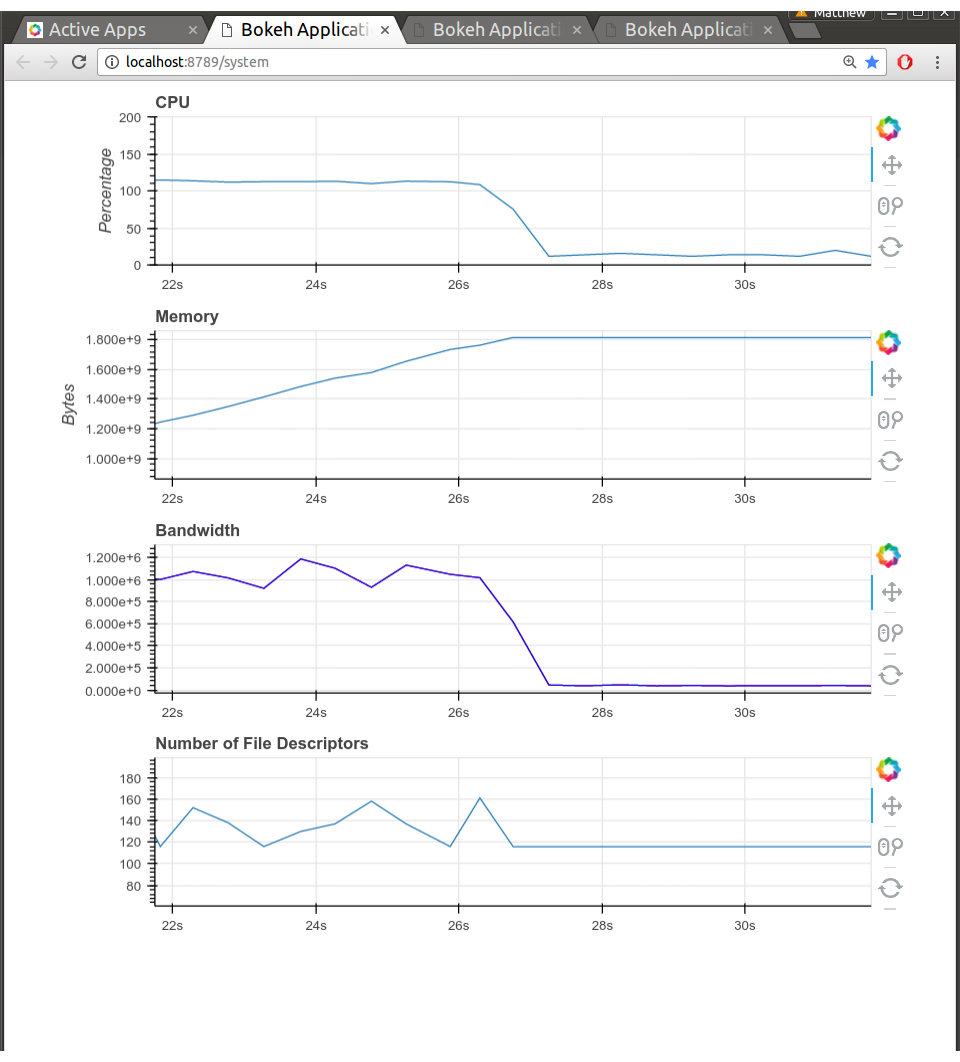 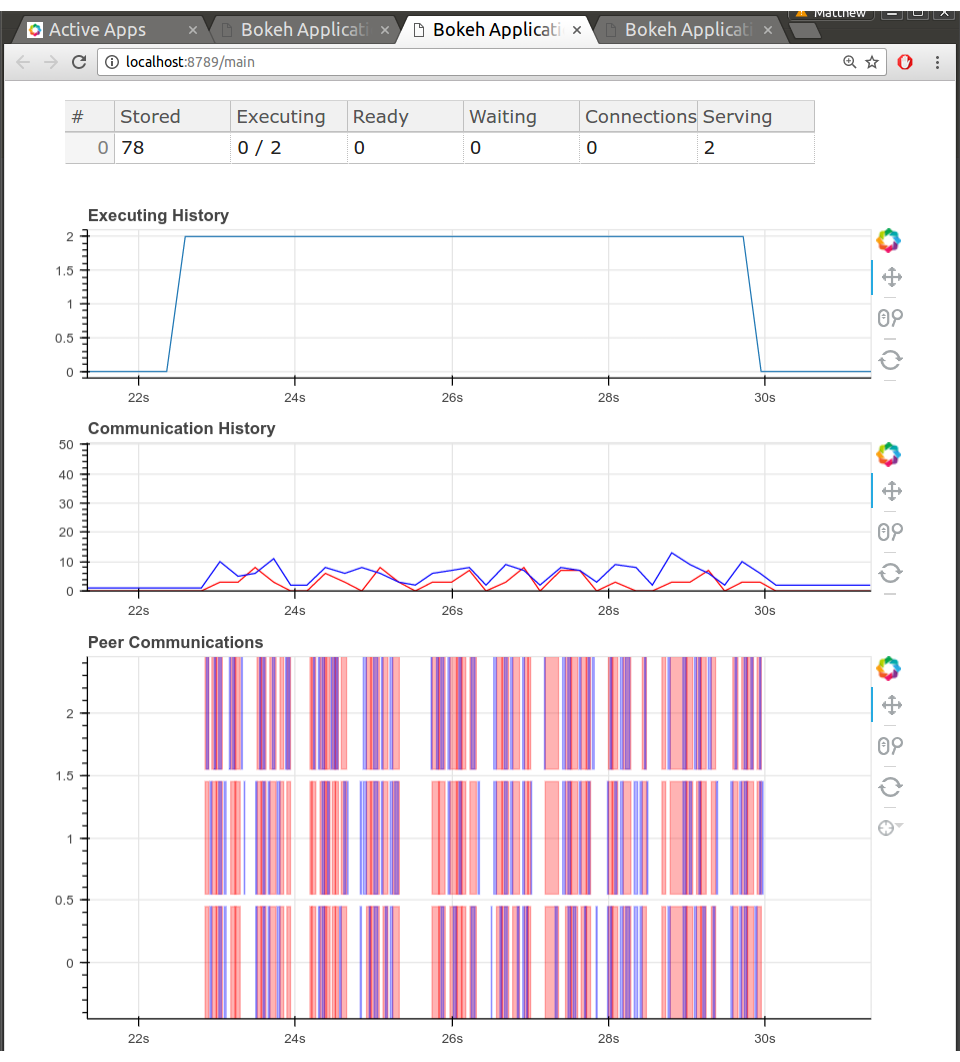 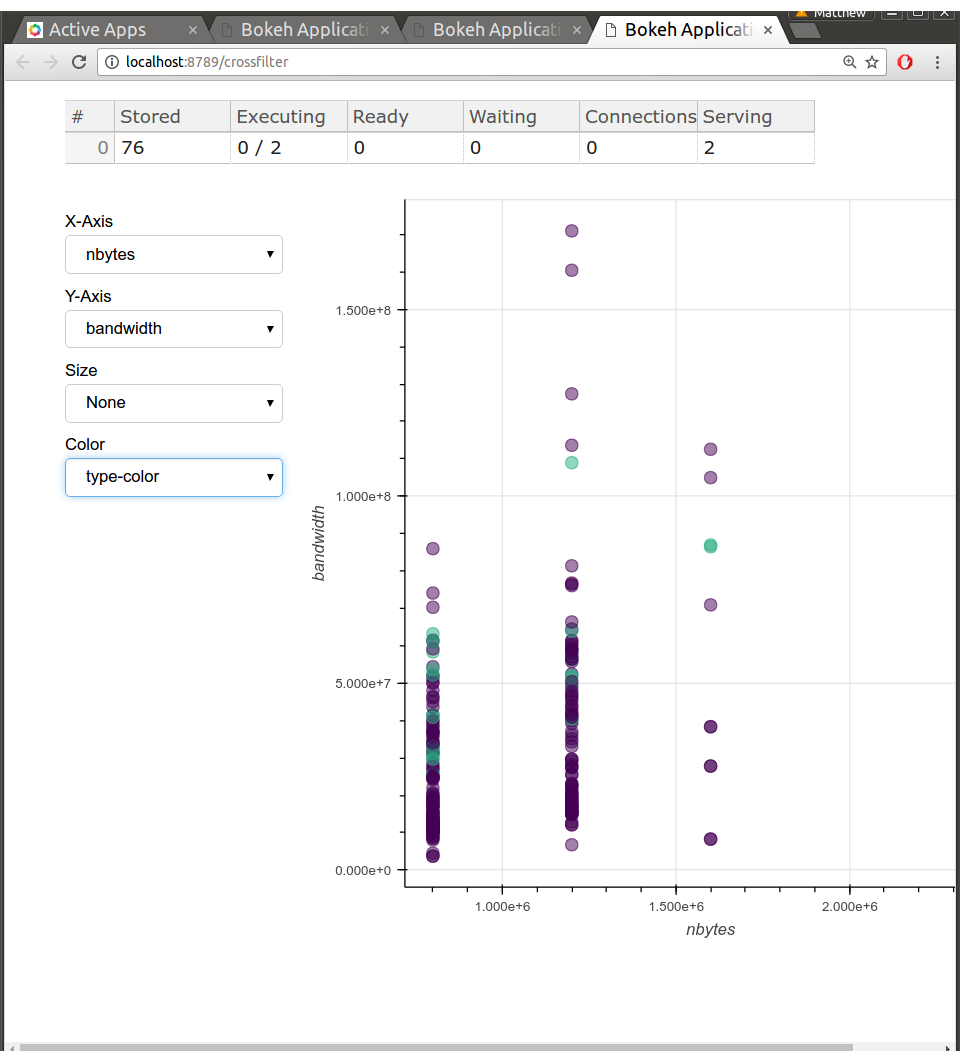 To be clear, these diagnostic pages aren’t polished in any way. There’s lots missing, it’s just what I could get done in a day. Still, everyone running a Tornado application should have an embedded Bokeh server running. They’re great for rapidly pushing out visually rich diagnostics.

Smarter Workers and a Simpler Scheduler

Previously the scheduler knew everything and the workers were fairly simple-minded. Now we’ve moved some of the knowledge and responsibility over to the workers. Previously the scheduler would give just enough work to the workers to keep them occupied. This allowed the scheduler to make better decisions about the state of the entire cluster. By delaying committing a task to a worker until the last moment we made sure that we were making the right decision. However, this also means that the worker sometimes has idle resources, particularly network bandwidth, when it could be speculatively preparing for future work.

Now we commit all ready-to-run tasks to a worker immediately and that worker has the ability to pipeline those tasks as it sees fit. This is better locally but slightly worse globally. To counter balance this we’re now being much more aggressive about work stealing and, because the workers have more information, they can manage some of the administrative costs of works stealing themselves. Because this isn’t bound to run on just the scheduler we can use more expensive algorithms than when when did everything on the scheduler.

There were a few motivations for this change:

Approximate nunique and multiple-output-partition groupbys landed in master last week. These arose because some power-users had very large dataframes that weree running into scalability limits. Thanks to Mike Graham for the approximate nunique algorithm. This has also pushed hashing changes upstream to Pandas.

Martin Durant has been working on a Parquet reader/writer for Python using Numba. It’s pretty slick. He’s been using it on internal Continuum projects for a little while and has seen both good performance and a very Pythonic experience for what was previously a format that was pretty inaccessible.

He’s planning to write about this in the near future so I won’t steal his thunder. Here is a link to the documentation: fastparquet.readthedocs.io